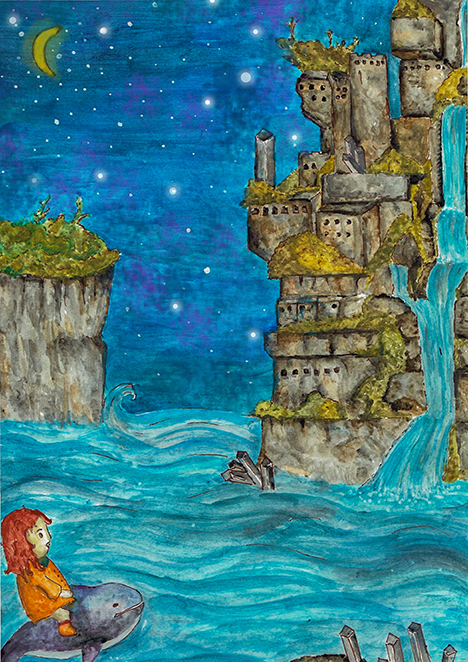 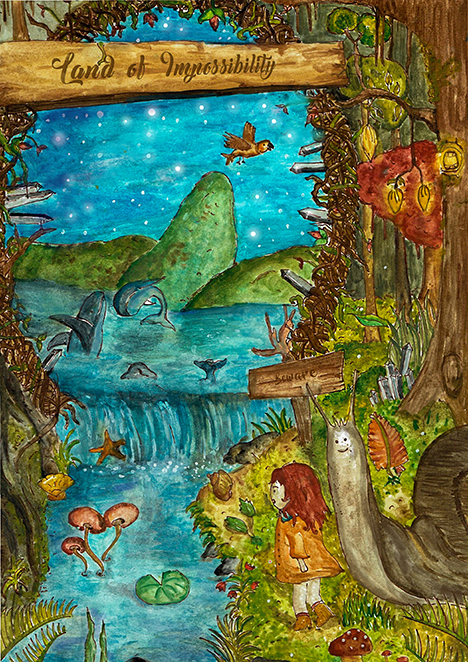 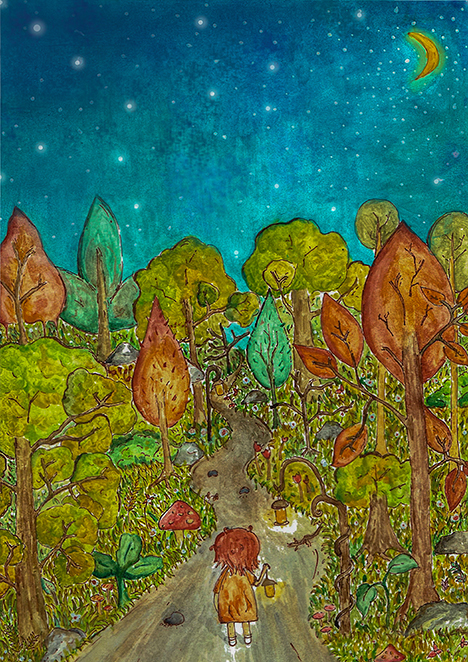 An imagination about the world of innocence, where the world is far from wickedness, harm, crime, and other human’s malignancies. Back to the era of Adam and Eve, when there was no gap between the living creatures and nature, when the world had not been addicted to dramas and selfishness that got us following the wrong direction. Through my artwork “Journey to The Greater World”, I illustrated an ordinary lass (that can be considered as us, an ordinary human beings) who yearned for the peaceful sky of stars. That she could only do little good deeds to reach that peaceful sky of stars, which speak for the world we’re living.

The journey started when the girl got into the ‘Forest of Hope’. The ‘Forest of Hope’ means that there’s still a hope to build a greater world, if at least there’s one person that could be a light in the darkness. Thus, I illustrated the little lass who brought a lantern. Along with colourful living trees surrounded her that represent a growing hope. The journey continues till she met ‘A Land of Impossibility’, that interprets the impossibility to change the world, just because she was just an ordinary little girl with no role as a public figure. But still, there’s nothing can hold up our efforts to have a better world if we build a community, courage others to unite, this is illustrated by a snail that accompanied her to face the impossibility. Because the snail itself symbolizes the bridge of gap between us, ordinary citizens and the bad environment. And the dolphins symbolizes the fact that the girl had got nearer to her final destination, based on the belief stems from the fact that ancient sailors who spent months or even years away from land found the sight of dolphins swimming around their ships to be the first indication that land was near. So the little lass decided whether the journey continues or not. ‘Sea of Miracle’, could be her next destination, the living rock hills, represent the rigors of life but there’s still clear water that able to rinse away the hardness. If we could climb out the rock hills and let off the water flows that had been clogged by rocks. In the end, the sky that seemed so strenuous to reach, could be our turning point in life. To spread as much stars as we can, which the stars themselves represent the good deeds that we have done to others. The more stars we collect, the more peaceful & unity in the sky, that speak for our world.

I am twenty years old Euodia Louis, majoring in Visual Communication Design at BINUS University. I am a 4th semester full-time student. I have some experiences in organizations, specifically in Branding Department. I was involved in Asian English Olympics, one of the biggest event hosted by BINUS University as the coordinator of Design and Production division. Also in many other events like English Community Conference, Social Event, National English Olympics, etc. Now I am developing an upcoming start up business as one of the co-founders. I have a really big passion in Art & Design.